Cambodia is a Unitary dominant-party parliamentary elective constitutional monarchy, it has a land area of 181,035 square kilometers in the southwestern part of the Indochina peninsula, about 20 percent of which is used for agriculture. It lies completely within the tropics with its southernmost points slightly more than 10˚ above the Equator. International borders are shared with Thailand and the Lao People's Democratic Republic on the West and the North, and the Social Republic of Viet Nam on the East and the Southeast. The country is bounded in the Southeast by the Gulf of Thailand. In comparison with its neighbors, Cambodia is a geographical contact country administratively composed of 20 provinces, three of which have relatively short maritime boundaries, 2 municipalities, 172 districts, and 1,547 communes. The country has a coastline of 435 km and extensive mangrove stands, some of which are relatively undisturbed. The Kingdom of Cambodia has 24 provinces and cities. The Capital of Cambodia is Phnom Penh, the vibrant bustling capital of Cambodia. Situated at the confluence of three rivers, the mighty Mekong, the Bassac, and the great Tonle Sap, what was once considered the 'Gem' of Indochina. The capital city still maintains considerable charm with plenty to see

Our Cambodia travel guide caters to just about any holiday preference.

Cambodia's climate, like that of the rest of Southeast Asia, is dominated by monsoons, which are known as tropical wet and dry because of the distinctly marked seasonal differences. Cambodia has a temperature range from 21 to 35 °C (70 to 95 °F) and experiences tropical monsoons. Southwest monsoons blow inland bringing moisture-laden winds from the Gulf of Thailand and the Indian Ocean from May to October.

The northeast monsoon is in the dry season, which lasts from November to April. The country experiences the heaviest precipitation from September to October with the driest period occurring from January to February.

Cambodia has two distinct seasons. The rainy season, which runs from May to October, can see temperatures drop to 22 °C (72 °F) and is generally accompanied by high humidity. The dry season lasts from November to April when temperatures can rise up to 40 °C (104 °F) around April.

The Khmer language is a member of the Mon–Khmer subfamily of the Austroasiatic language group. French, once the language of government in Indochina, is still spoken by many older Cambodians and is also the language of instruction in some schools and universities that are funded by the government of France. There is also a French-language newspaper and some TV channels are available in French.

English is widely taught in several universities and there is also a significant press in that language, while street signs are now bilingual in Khmer and English. Due to this shift, English is now mostly used in Cambodia's international relationships

The Khmer script is derived from the South Indian Pallava script.

A passport and visa are required. Tourists and business travelers may purchase a Cambodian visa valid for one month at the airports in Phnom Penh and Siem Reap and borders. Both require a passport valid for at least six (6) months from the expiry date, and 01 recent passport-sized photo.

Tourists also can get their visas prior to their arrival through this link Cambodian Embassy or Consulate overseas. Tourists also can get an online E-Visa before traveling. Some nationalities are required to get a visa in advance at the Royal Embassy of the Kingdom of Cambodia in their country: Afghanistan, Algeria, Arab Saudi, Bangladesh, Iran, Iraq, Pakistan, Sri Lanka, Sudan, and Nigeria.

A departure tax is charged on all domestic and international flights.

Cambodia may be one of the least developed countries in South-East Asia, but its telecom infrastructure is rapidly developing. In spite of the overarching poverty, the number of mobile phone users has increased exponentially over the past decade, and several local service providers now offer competitive packages and prices. Roaming charges are extraordinarily high in Cambodia so it's definitely worth investing in a local SIM on arrival, especially as set-up prices and plans are extremely affordable. WiFi is also widely available across the country and is useful for saving further money on data.

pre-paid plan with CellCards, as they have English-speaking staff and cheap data packages, and CellCards also tends to be the carrier of choice for those looking for a data plan. It's also affordable to make international calls on this network, so long as you dial 177 before the country code.

You're likely to find that reliable WiFi connections are available in many western-style cafes and hotels in the big cities. And internet cafes are still popular amongst travelers and are relatively easy to find in tourist hotspots.

Do be aware that it can be quite common for your internet to drop out, as both ADSL and fiber-optic cables can get disconnected at any time without notice.

Best choice to keep the connection with your family, and friends- Buy the SIM CARD 3G or 4G

At first, glance, crossing the road in Vietnam may seem impossible. Newcomers can spend a considerable amount of time trying to find a gap in the stream of motorcycles, only to be led across the road by a sympathetic local. After a bit of practice, most travelers realize it is much easier than it looks. There is a rhythm to Vietnamese traffic that, with a predictable stride and a bit of bravery, will flow around you like water as you cross to the other side unscathed.

The taxi costs from 5$-7$ for the 20-50 minutes or 20$-30$ per day ride into and within the city center. Cheaper, faster, and less comfortable, motorcycle taxis can be hired for $2 in town. For transfer from the hotel to the airport costs from 8$-10$ per way and you can find it at most hotels and travel agencies nearby you.

At the moment, most tourists can find the easy way by taking the REUMORK (Tri-cycle motor) or Cyclo (Tri-cycle) anywhere in the city at a cheap price. Cyclo is charged at the cheapest price and it is most used by many tourists who wanted to visit the city slowly.

For a taxi to the province, you can find it around Phsar Thmei (New Central market) or Phsar Deum Ker or at any travel agent.

- Khmer food is one of the major national identities that reflect the ways of life. Cambodian cuisine or Khmer cuisine is not only rich in flavor, but also in culture. Cambodian food is known for its freshness and simplicity and includes Indian food, Chinese food, and Thai food. The staple for every meal is rice. Rice is prepared and served in a variety of ways including deep-fried rice cakes or in chicken noodle soup. Other important foods are vegetables, fruits and fish. There are many popular dishes; some special Cambodian dishes are the Turmeric Fried Fish, Coconut Pork Skewers, and lots of other chicken and fish dishes.

- Bottled water is found everywhere, as Cambodian tap water isn’t considered safe to drink. Be aware that the ice that is invariably added to cold drinks (unless you request otherwise) may not be hygienic except in Western restaurants.

Travelers are advised to be up-to-date on pneumonia, tetanus, typhoid, and polio immunizations.

Always keep hydrated as you are traveling in a warm humid region where you can lose fluids quickly from perspiration. There are still some issues regarding sanitation and tropical diseases, such as dengue fever in some periods of the year.

the quality of medical facilities and equipment in Cambodia is still below the globally accepted standards to some extent. Public hospitals are generally understaffed, and medical infrastructure is under-equipped. It prevents foreign tourists from receiving quality medical treatments at public hospitals. However, treatment and consultation fees in public hospitals are reasonable, even free of charge for poor locals who are unable to pay.

Medical staff and doctors in these medical facilities mostly undergo training and practice in Western or nearby countries with a good healthcare system. They can communicate smoothly with patients in English, and French.

Shopping is not the main concern during the holiday trip but also a good idea to buy local gifts for your family members. Here is the list of shops.

The soft and beautifully designed Khmer silk is sold like hot cakes across the country. There are two kinds of Khmer silks: the old silk made years ago and the new silk produced nowadays.

Of course, this item is the favorite souvenir in any tourist destination. Bringing home, a t-shirt featuring the famous Angkor Wat or other Khmer symbols is kind of cool. Price ranges from $2~5 depending on the quality and where you get it.

Cambodia has never lacked outstanding artists. You don’t have to go to galleries to get great paintings because the ones you find in the streets are also stunning works. It’s also good to support the local artists who don’t have the privilege of specific galleries.

The Cambodians are endowed with the genuine skill of making handicrafts and the ancient traditions were handed down from generation to generation. Delicate carvings and Buddha statues bas-reliefs (just like those you find at the enclosure of Banteay Srei) are available in both Phnom Penh and Siem Reap.

No one would deny the temptation of colored Cambodian gemstones. In Siem Reap, you can see jewelers selling sapphires and rubies. It’s advised to do some homework about gems before you decide to pay.

Emergency Travel and health insurance are not included in our tour package. This is an important requirement when you travel with us for your safety and peace of mind in the unexpected event that you need urgent international standard care.

we highly recommend travelers obtain international health insurance, which can help them access the international standard healthcare system in Cambodia and beyond it at reasonable prices. Or at least, visitors should bring essential personal medication to deal with some popular diseases and illnesses. The following list of best hospitals and medical centers in the most highlighted places in Cambodia definitely will give you much confidence in case of unexpected emergencies.

You should buy travel insurance in your country as it will be more convenient for you to deal with any claims and adjustments upon your return home. We do not endorse anyone's travel insurance company but suggest you consider www.travelguard.com, as past clients of ours have had good experiences with them in times of need. Also, check with your insurance provider to see if they cover:

Tipping is always a sensitive matter for visitors to a country with different cultural expectations than the country you are from. You don’t want to overtip, but at the same time not under the tip. Some countries don’t accept tips. Our philosophy for tipping in Cambodia is, if someone had done a good job it’s always nice to acknowledge their service. Our friendly suggestions:

Tipping of 2 USD for hotel porters is welcomed.

Tipping is not expected but appreciated. Tip only if they’ve done a good job, and tip as you feel at the end of their service. Tipping in restaurants is not expected either but if the waiter provided good service, then you can leave a tip in the local currency of about 2 USD (50,000 VND). 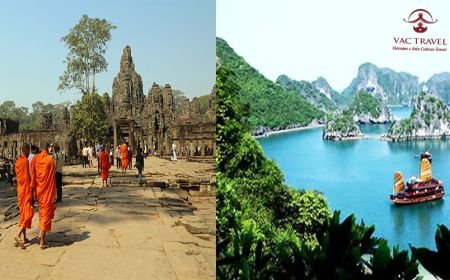